Somehow only the float fisherman used to fish for bream, we sometimes heart that someone took it on lure, but it was concidered accidental. It was like that until Igi this guy from Haifa appeared somewere about two and a half years ago, an he wanted to explore the saltwater UL fishing. He had some success on spinners first, and then he tried small minnows, it worked even better and then he found an excellent Australian site: http://www.breammaster.com/
It was a breakthrough, following that summer he summarized all his knowledge in small article, in Russian of course... If someone interested it is still the best source for bream fis 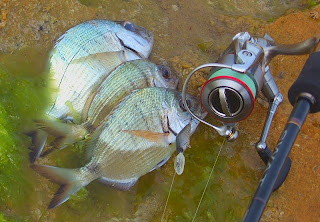 hing.
I was busy then setting up my fly fishing, but then I was invited to visit the best bream spot near Rosh Hanikra with someone who knew what to do. My goal that day was to catch a bream on fly. I tried Crazy Charlies, Clousers and a special weapon Green Polarflash Clouser and the fish has just ignored it. In that time Andrey was taking fish after fish showing me the spots were the fish is staying. I decided to switch to spinning and feel and find the fish myself. I chose Duel Hardcoe SH50 (my favourite now) , but that day I have seen no fish at all.
Some time later I went to different place alone, it is somewhere near Netaniya. Someone told me it was a realy interesting spot.
As i approached the nearest rocks on my third cast I had a bite and my very first sea bream was trying to eat my Hardcore.
Untill now thi place is one of my favourite in my bream fishing, though this fish has it's own moods and is never easy, yet I have never cought one on fly.
I have noticed that my best lures for bream are all vibrating and tried to tie something like a fly with a lip, and I even made a couple, but none of them would work like they supposed to. 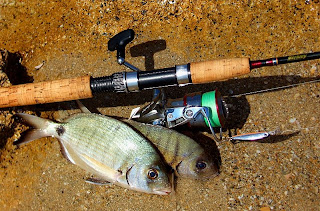